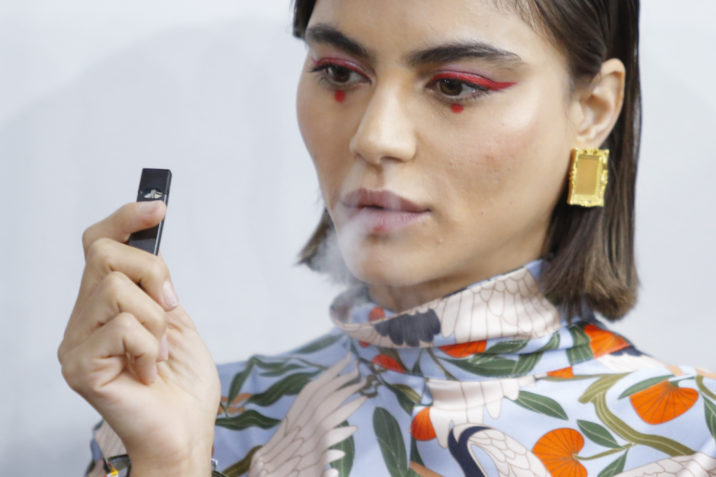 Clouds of smoke: How cannabis stock photography got out of control

This past summer, the podcast CANADALAND released an episode titled “The Legend Of Weed Toque Girl” which took listeners through an uncannily challenging search for the subject of an accidentally iconic image: a young girl with bright white sunglasses, exhaling plumes of smoke and wearing a toque (you might call it a beanie) with WEED knitted into the folded-up brim.

Multiple photojournalists have taken similar pictures, from 420 festivals all over the world, and they often end up leading a news story. Even if that news story has nothing to do with a cannabis festival and has more to do with, say, environmental issues or a survey tracking the public’s current perception of cannabis.

Before arriving at the juicy interview with the long lost “weed toque girl,” (aka ), the CANADALAND episode checks in with freelance photographer, Justin Tang who, besides capturing Trump, Obama, and Trudeau for the Canadian Press has also lensed some 420 festivals, to get his perspective on these festival images.

As a news photographer, Tang explains that he wants to tell a story in one image, a “quick read” so that someone doesn’t even have to rely on the caption to understand what is going on in the story. Moreover, at a 420 festival, he’s looking for someone doing something out of the ordinary. He’s the photographer who pulled the trigger on weed toque girl.

Once a photo like that is submitted to a press agency, photographers like Tang don’t have much control over which stories the images become paired. That’s up to the photo editor, and photographers like himself get paid once for the photo, no matter how often the image is used.

The practice of using such images so prolifically, despite the subject matter of the story is what Jag Davis of the Drug Policy Alliance (DPA) calls a harmful depiction of the average cannabis consumer. “It gives the wrong impression, and there’s like no other serious civil right and racial justice issue that would be treated in such the condescending way,” says Davis.

Tired of seeing the played-out themes of green leaves and “stoners” laying out on lawns during a 420 festival, the DPA tried to do something about it.

In 2015, they created a set of free-to-use normcore stock images that they felt better exemplified the diverse nature of the cannabis consumer, namely those using the plant as medicine. The photos depict subjects of various age, race, and consumption methods. Although outlets like The Guardian and Vice did use the pictures for a time, it’s nearly impossible to find the DPA images in play any more.

Toronto photographer and canna-business owner, Patrick Moher, calls it a symptom of the day and age. He identifies two things influencing the media when it comes to choosing images for cannabis stories: a lack of good, realistic image sources, and the muddied waters that represent cannabis marketing regulations. Photo editors keep relying on the same sources—Getty Images is a prime example—only to return with the same stigmatized images of cannabis activity.

Photographers will regularly create lifestyle images and submit them to Getty with the hopes of having those images licensed out by news outlets and marketers, but without clarity on how to depict cannabis—de-stigmatized, and don’t forget unsexy—the efforts of a cannabis illiterate photographer could be a waste of time.

So how do we solve the recycling of stigmatized weed image in the media? Davis suggests simply that photo editors get more creative in their use of images.

Moher, who spent this weekend photographing a cannabis event of sorts—the Lift & Co. Expo in Vancouver offering a much more buttoned up and lanyard-filled version of the 420 festival—says he would like to create a ton of modern, clean, vibrant lifestyle imagery for the contemporary cannabis consumer and is taking steps to become more familiar cannabis marketing compliance before proceeding.

This content was originally published by TheGrowthOp on January 15, 2019.